FROM BROADWAY WITH LOVE

You are here: Home / Special Event / FROM BROADWAY WITH LOVE 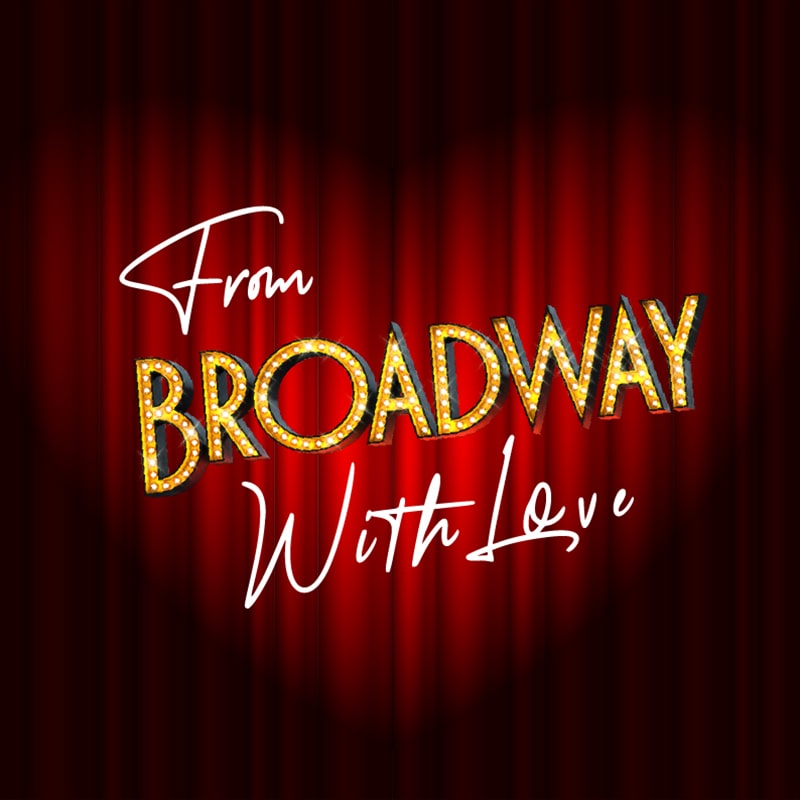 Nothing lights up the Broadway musical quite like great love stories, whether they are tales that reflect a star-crossed tragedy or that demonstrate the exhilaration of romantic love. This celebration of some of Broadway’s greatest love songs performed by six of the finest vocalists (three real-life couples) from “The Great Bright Way”.

The evening will include songs from Waitress; Wicked; Little Shop of Horrors; Jersey Boys; Beautiful: The Carole King Musical; Moulin Rouge!; Company; Anything Goes; My Fair Lady; Funny Girl; Into the Woods; She Loves Me; Honeymoon in Vegas and more!!!

MATTHEW SCOTT starred as Adam Hochberg An American In Paris on Broadway and the National Tour. He was featured in Sondheim On Sondheim, alongside Barbara Cook and Vanessa Williams. Other Broadway: A Catered Affair, and the original company of Jersey Boys, as well as last season’s Grand Horizons by Bess Wohl. West End: Lee in I Loved Lucy at the Arts Theatre. Regional Theatre: The Light In The Piazza (Barrymore Award); Saturday Night; Beaches; Company; Side By Side By Sondheim; Chaplin (San Diego Critics Nomination.); A Wonderful Life; Ragtime; My Fair Lady; Carousel; West Side Story (Kevin Kline Award Nomination); Legally Blonde; Swing!,; Les Miserables; Sunset Boulevard, and Mamma Mia!. Television: “First You Dream: The Music Of Kander & Ebb” (PBS), “All My Children”, 2006 and 2009 Tony Awards. Recordings: Sondheim On Sondheim; Jerome Kern: The Land Where The Good Songs Go; Noel And Cole and The Enchanted Train with Rebecca Luker.

MAGGIE LAKIS was last seen as Gretchen Fox/puppeteer in the Off Broadway production of Jim Henson’s Emmet Otter Jugband Christmas. She was Bea in the 1st National Tour of the hit Broadway musical Something Rotten!. She’s performed over 1,200 performances of the Tony award winning musical Avenue Q in the show’s 1st National Tour as well as the most recent New York production at New World Stages. Other credits includes John Doyle’s re-imagined Allegro at Classic Stage Company, Duncan Sheik and Nell Benjamin’s new musical Because Of Winn-Dixie at Delaware Theatre Co. as well as regional credits all over the country including Into the Woods (The Muny), Clybourne Park & Sunday in the Park with George (Arden Theatre Co), Tin Pan Alley Rag (Wilma Theatre), Sylvia & All My Sons at Delaware Theatre Company, Our Show of Shows (Flat Rock Playhouse), and Little Shop of Horrors (11th Hour / Theatre Horizon) for which she received a Barrymore Nomination for Best Actress in a musical. She cherishes any opportunity to sing a alongside her real life leading man, Rob McClure.

KENNEDY CAUGHELL is a Broadway performer and Voice over Artist, who was raised on a small Oklahoma ranch and is now based out of New York City. She got her BFA in Music Theatre from Elon University. Shortly after graduating, she performed across the nation and abroad as Heather in American Idiot. Kennedy then traveled the country by broomstick in the National tour of Wicked, covering the role of Elphaba. She performed on Broadway in Natasha, Pierre and the Great Comet of 1812 with Josh Groban, and was most recently seen playing Carole King in the Broadway and National Touring production of Beautiful: the Carole King Musical before the shut-down. Some of her favorite regional roles include Mary Poppins (Mary), White Christmas (Betty), Beauty and the Beast (Belle), Peter Pan (Peter), and Into the Woods (Little Red). Kennedy recently returned to New York City following the Chicago engagement of the Broadway bound musical Paradise Square which will be opening on Broadway soon. You will also be able to catch her in the starring role of Katherine in the original cast of the new Broadway-bound musical SuperYou.TV: “Law & Order: SVU”, “Parked For Love”, and “The Outlier”. She always loves any opportunity to share the stage with her husband Tim.

TIMOTHY FRASER is excited to be here joining his wife Kennedy! A Portland, OR native, Tim made the move to the east coast seven years ago. Since then, Tim has been seen in NYMFproductions, SuperYou (Matty), as well as concerts at 54 Below and Greenroom 42. He most recently completed a run as the title role of “Buddy” in Elf: The Musical. Credits include Joseph and the Amazing Technicolor Dream Coat (Joseph), Peter and the Starcatcher (Boy), Spring Awakening (Melchior Gabor), Into The Woods (Jack), and leading in the world premieres of The Snow Queen and A Minister’s Wife in the Bay Area. TV/Film credits include I Almost Got Away With It (Discovery+) and The Plot Against America (HBO).

STEPHEN DeANGELIS (Producer/Host) has produced over 300 different Broadway concerts at venues in New York and across the United States featuring a multitude of Broadway stars including many Tony Award and Drama Desk Award winners and nominees, stars from hit television series and films whose roots are on stage and Broadway’s fastest rising young performers. Throughout his career, he has worked with over 100,000 performers across all entertainment mediums. He is also the Producing Artistic Director and Host of At This Performance… ,  the critically acclaimed concert series that has showcased the talents of  over 1100 Broadway Standbys, Understudies and Alternates since October 2003. His work as a Producer of the ongoing series was acknowledged in BroadwayWorld’s List of “Best Club, Cabaret and Concert for 2021”. He has cast over 3600 network television and radio commercials for Manhattan’s leading advertising agencies for such clients as DirecTV, Olive Garden, Red Lobster, E*TRADE, Febreze, Cover Girl, Pantene, Advil, Robitussin, Downy and Hewlett-Packard and has contributed to many historic and award-winning spots and campaigns including many which have been recognized with Platinum, Gold and Silver Lions at Cannes. Stephen also cast the six-time Emmy Award nominated Playhouse Disney series “Johnny and the Sprites” starring Tony Award nominee John Tartaglia which was seen on the Disney Channel. His work has been seen in New York and regionally in over 300 theatrical productions for companies including Musicals Tonight!, York Theatre Company, The John W. Engeman Theater at Northport, The Drama League, Casa Mañana, North Shore Music Theatre, Virginia Stage Company, Connecticut Repertory Theatre, Syracuse Stage, Stage One, Studio Arena Theatre, American Stage Company, GeVa Theatre, Starlight Theatre of Kansas City, the St. Louis Municipal Opera (The MUNY) and Dallas Summer Musicals among others as well as numerous festival showcases, workshops and readings. Other credits include The World AIDS Day All-Star Concert Revivals of Pippin and The Secret Garden, the All-Star production of Elegies for Angels, Punks and Raging Queens and the 25th Anniversary National Tour of Hair. He is a proud member of the Stage Directors and Choreographers Society and has staged musicals in major theatres across the country in Boston, Philadelphia, Washington D.C., Dallas and St. Louis and throughout New York and New England. Recent productions include the All-Star concert version of Into the Woods, the 50th Anniversary celebration of the Tommy album (both at Patchogue Theatre) as well as a variety of productions for the Drama League. Stephen is the Producing Artistic Director of the new Pocono Center for the Arts which is now scheduled to open in late 2022. He has worked with Actors, Singers, Dancers, Directors, Choreographers, Composers, Lyricists and Playwrights who have been recognized with the following distinctions across all mediums: 253 Tony Award wins, 827 Tony Award nominations, 248 Drama Desk Award wins, 947 Drama Desk Award, nominations, 31 Drama League Award wins, 195 Drama League Award nominations, 196 Primetime Emmy Award wins, 836 Primetime Emmy Award nominations, 128 Daytime Emmy Award wins, 485 Daytime Emmy Award nominations, 51 Academy Award wins, 156 Academy Award nominations, 22 Olivier Award wins, 75 Olivier Award nominations, 144 Grammy Award wins, 452 Grammy Award nominations, 108 Golden Globe Award wins, 363 Golden Globe Award nominations, 5 Pulitzer Prize wins, 8 Pulitzer Prize Award nominations and 8 Kennedy Center Honors recipients.